The Foundation was established in 2018 and received IRS exemption as a 501(c)(3) charitable organization in February, 2019. The Foundation is the successor to the Dolphin Club Building Fund Committee, which created the Building Fund in 1998 to develop and maintain an additional source of capital for major building-related projects.

San Francisco Park Trust originally hosted the Building Fund and in 2011, the committee transferred the fund to San Francisco Baykeeper.  Our agreement with Baykeeper ended in 2019 and the Dolphin Club Board of Directors in conjunction with the Foundation board agreed to transfer the Building Fund to the Foundation, maintaining the original purpose of supporting the building, deck, and dock.

The purposes of the Dolphin Swimming and Boating Foundation are charitable and educational, each within the meaning of Section 501(c)(3) of the Internal Revenue Code. In the context of these general purposes, the foundation shall maintain city and county property at 502 Jefferson St., San Francisco for public use and recreation; and provide classes and education on swimming, rowing, and boat building.
​
Board of Directors

History of the Boathouse

The new Club petitioned the San Francisco Board of Supervisors to put up a boathouse at the foot of Leavenworth Street. Permission was received in April 1878. At the time Columbus was named Montgomery Ave, and Leavenworth St ended at the intersection of North Point Street. Val, J.L., and E. Kehrlein, et al, occupied the southwest corner lot of the intersection.

​​It took only a month or so to erect the boathouse.  A surplus building was acquired from the Union Iron Works. Pilings were driven, and the building placed out on the new pier. 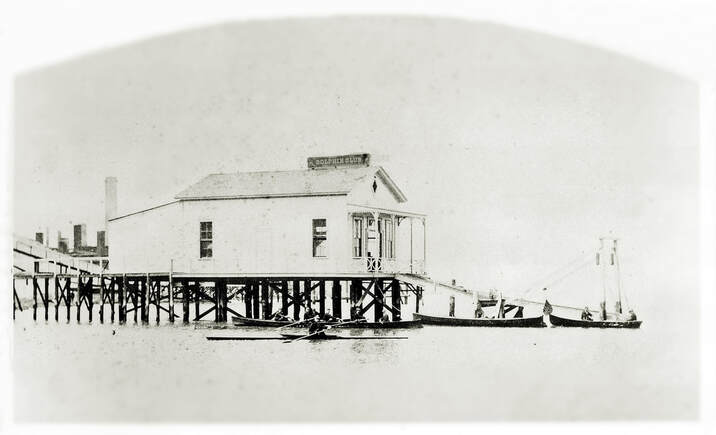 Later photograph of the first boathouse. Shown at the rear (towards land) is a twenty-foot extension added in 1885 providing a dressing room, bath room, and fresh water. A sketch, like the above photograph, was printed in the San Francisco Chronicle on March 31, 1894.
In 1895 the City advised the Club of their plans to extend both Leavenworth and Columbus (named Montgomery Ave then) Streets. Unless the Dolphin Club moved their boathouse it would be buried under tons of sand and rock soon to be dumped on the beach. There was no choice but to move. The first plan was to keep the boathouse, move it, and then add a second story. The eventual decision was to build a new structure on a site to be negotiated with the City.

​The original Dolphin Club boathouse was advertised for bids and sold for $20 in March 1896. It was then moved to 872 North Point Street, renovated, and still exists. It sits behind 880 North Point, cramped on all sides, and is best viewed using satellite photography.
​
The Board of Supervisors gave their permission to build a $2,000 modern boathouse at the foot of Van Ness Avenue in the water at the foot of a steep bluff. At that time the end of Van Ness was up on the hill.  A path and wooden stairs would lead down to the boathouse. Architect Adolph C. Lutgens, a charter member and club president in 1879, designed the new building. The boathouse was completed in February 1897.
​The Dolphin Swimming & Boating Club was the first rowing club to be located in what was then known as Black Point Cove. It would be about ten years later, in 1908, before the South End Rowing Club arrived there, and the Ariel Club built a clubhouse about a year later.

​As before, the Dolphin Club had no claim of ownership to the land they occupied. With foresight the boathouse was built so that it could be moved. Indeed, it would be moved twice, in 1927 and 1937, before settling at its current location. These moves were forced by the extension of Van Ness Ave, the construction of Muni Pier, and the development of Aquatic Park including the municipal bathhouse (now the Maritime Museum) and grandstand.

Over the years the structure has been enhanced with handball courts, locker rooms, galley, weight room, and the large annex in the 1980’s, however the heart of our boathouse is still the one that once sat alone on Black Point Cove.